Has software taken away from artistic inspiration?

Digital Artist have created many stunning works over the years and pushed the boundary lines of what we accept as art.  From the artist which uses Corel or Painter to make a digital image with a traditional twist, to the 3D artist who uses Maya or 3D Studio max to compile their compositions, there is little doubt that the computer has affected our modern views of art. And while the age old question of “what constitutes art” is still subjective, one has to question whether or not this open policy has negatively affected the inspiration and artistry found in art. 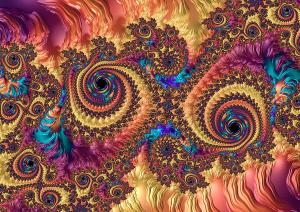 It is disturbing to see so many stock images recycled and claimed to be original works of art. Much like slapping a mustache on the Mona Lisa did not require much inspiration, using a stock image to compile a work of art does not take much effort. Granted, the artist may choose to add some unique features to the stock image or clip art, but the fact remains that it is common and that the probability that the selected stock image has been used before is quite likely. Should such be considered a work of art then? I would venture to say that unless the artwork is used in a way similar to This is not a pipe, it is not. Yes, it may be pretty, but one can hardly attribute inspiration to a work that is merely a composition of another person’s vision.

The reverse side of the argument is that digital art allows the artist to explore new boundaries which the traditional mediums would limit. For example: One can use the 3D modeling to create multiple views and renders of a composition with the push of a button where that same artist would have to repaint or redraw the image if using traditional methods. Additionally, one would argue that the digital artist can fix mistakes that he or she finds within their compositions without having to discard the painting or sculpture and start anew. In this regard, the digital artist is able to expound upon their inspirations without the limitations of running out of materials or losing their inspiration due to frustration.

As the software and advances in 3D continue to be developed, unique and uncommon works of art can emerge. Traditional artist can merge with digital opportunities and platforms to aid in such creations. In this aspect, digital artistry provides a means of inspiration rather than stifling it.

Perhaps the deciding factor is not in what can be created using digital software, but rather in the mentality behind using such software. Because there is a plethora of applications which can be applied and deemed as artistic, honing in on one such application would be biased at worst and unsubstantial to the argument at least. Therefore, in order to answer whether or not digital art has lost its inspiration, one has to look at the motivations of the individual creators of digital art. If the creator has used digital software to create a unique work of art which could only be accomplished through the use of such programs, then the answer would be “no” digital art has not diminished in its inspiration. However, if the computer and software is used as a crutch for the artist, meaning that the artist does not want to hone their craft but wants to bypass the need to learn the trade through the use of digital software, or if the artist relies upon the images, and works of others to makeup a dominate portion of the composition, then I would state that “yes” the inspiration of the art has diminished.

Where inspiration and modern technology meet.

One cannot abandon the precepts in which art was established. Traditional artistry will always have a place in the artistic world. Yet, we cannot be so blinded as to restrict art to the traditional medium. We are a culture that is saturated by technology and by social media. It would be rather naive to believe that the influences of our world would not impact, if only in part, the art which is produced by our current generation. While I frown upon those which would take the principles of artistry (such as form, color, positive and negative space, perspective, and emotion) and spit upon them in order to mass produce a work of “art” for profit, I would applaud the modern artist that uses modern technology to expand and expound upon their craft in order to create works of art which go far beyond what the imagination allows (such as with the creation of a sculpture in physical form through 3D printing

Has modern digital art lost its artistry?
Posted by NeuFutur Magazine at 2:59 AM