Can you give us a little insight about how Joi Noir came to be?

Igor: Olga and I met during my previous music project in Moscow in 2010. I had a day job in Congo and was sharing my time between Africa, Moscow, Toronto and Barcelona where Olga had moved to. Later on she followed me to Congo. Jack was in Africa at the time too. He and I have known each other since mid-1980s from our University days in Siberia. He used to drum for all major underground punk acts which flourished then. Now that all three of us were in this one exotic place it would have been a mistake not to start a band. It was Olga’s idea. She had discovered a club in Pointe-Noire where local and expat bands played.

Jack: It was called Iguane Café owned by a Frenchman René Vernice. He welcomed all sorts of bands including us. He gave us a place to rehearse and play at. The music there was very diverse ranging from traditional West African soukous and rumba to Irish jigs. We had a chance to meet a lot of great musicians and collaborated with some of them. René encouraged all that. It was really fun times.

Olga: We started to rehearse in February 2014 and in March we played our first short gig at a St. Patrick’s bash in Pointe-Noire. A couple of months later we had a set of 12 songs which I wrote and several covers including Bowie’s Space Oddity and Pretenders’ Mystery Achievement. When we left Africa and arrived to Kuala Lumpur we figured it would have been a waste not to record them. We went to a studio in KL and recorded ten songs in three days.

Your self-titled debut came out on May 22nd. What are particular highlights from the album?

Igor: This album is an attempt to reach a wider international audience. There is a few things that the listeners can relate to. Our main influences come from post-punk and new wave and you can hear it on Cake (The Queen Is Dead), All My Life and Miracles. I think this kind of music is coming around these days and we are definitely into it. Always have been.

Olga: We are a post-punk renaissance band. 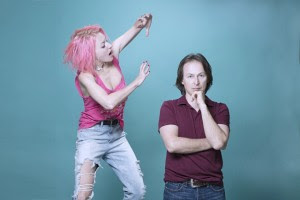 How have you evolved since your first few practices as an act?

Olga: I started to write songs in Africa. Igor used to ask me: How many songs have you written today? I’d say: three. He would claim it was not enough: You should write at least ten songs every day. So I would do that and then choose the ones with the most potential, arrange them and Igor would come up with the lyrics. This became our approach.

The band contains members from around the world (Canada, Spain, and Siberia); how does the disparate life experiences contribute to what listeners will hear on your release?

Igor: Joi Noir is an example of the globalization phenomenon. Russian musicians playing Western rock music, singing in English, forming a band in Africa, recording in Malaysia, mixing and mastering in the UK, marketing in the US and rest of the world via the Internet! Music without borders or cultural differences. As above so below every step of the way.

Olga: Our songs are compiled of various pop culture and post modern concepts that have become a common point of reference everywhere.

Jack: Ramones and The Sex Pistols had a major influence on the underground counter culture in Siberia in mid-1980s which I was a part of. The whole punk movement in the Soviet Union was a ripple effect from NYC and London with a 10-year lag. Still it was remarkable how things, thoughts and events propagated in most similar ways in spite of geographical and time distances, cultural and political differences. Behind the iron curtain we were oblivious of the details of the Western punk lore and history and tried to glue together facts about it like a puzzle from any source of information we could come across which was very scarce. We used to pay half a monthly salary to buy The Sex Pistols and Clash records smuggled into the USSR black market. Yet we were so impressed with the phenomenon and the sheer energy and angst that we had no choice but to pick up guitars and start playing. We had a lot of anger. There was a lot of things to be angry about. But it was fun and it shaped us in so many ways that now we can’t get rid of it no matter how we try.

You have also released your debt album on vinyl. The resurgence of records has been amazing, but what specific qualities to this larger format made the band decide to go in that direction?

Igor: Vinyl is cool. It brings back a warm and fuzzy feeling about the good old days when vinyl was a special medium to give music a special value. Although our album was recorded, mixed and mastered digitally it sounds better on vinyl. I don’t know how but it just does. Alex Wharton made a great master for us at Abbey Road and cut lacquers to press it on vinyl.

Olga: Of course, none of it would have happened without Gareth Jones at Strongroom Studios in London who had done an amazing mix of the album and recommended Alex to us. The final result sounds awesome on vinyl.

Jack: Believe it or not but we sold more LPs than CDs. There’s a whole vinylomania going on right now. 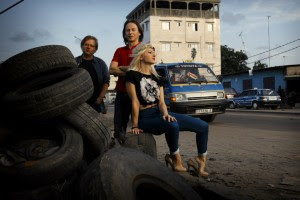 Joi Noir just made it to Malaysia. What was the band doing over on that side of the world?

Igor: We are breaking into the local music community. The bands are big in numbers here. Working with promoters and exploring the rest of Southeast Asia. Malaysia is a great hub to allow you to do that. We have also traveled to Singapore, Cambodia, Indonesia, Thailand and Nepal. Destinations with amazing cultures.

Olga: I’m working on new material for our next album. We also just came from a studio where we recorded a song for a tribute to one of the new wave Russian bands from the 1980s Obermaneken. We were excited when they asked us to do it.

Olga: Facebook is the best. It brings more engagement and interaction.

Igor: The Internet changed the reality forever. It offers flexibility to transcend time zones, international borders and accessibility to resources. A democratic cosmopolitan approach. Just the way we like it.

What does the rest of 2015 hold for you? What sort of hints can you provide about future music from the Joi Noir camp?

Igor: We plan our next album to be recorded by Steve Albini at his Electrical Audio Studio in Chicago. Two weeks ago we met with Steve in Barcelona and discussed the details. I wish I could say that he would produce our record but he detests the concept of a producer. Steve’s approach is to do the best job possible to record the band without imposing on their musical direction or creative process.

Olga: Steve’s cool, approachable and accommodating. We are looking forward to working with him.

Olga: Our album is streamlined from SoundCloud

You can also sample it from iTunes: itunes.apple.com/us/album/joi-noir/id990827690

LPs and CDs are available only from our website joinoir.com/#store

Thank you so much for your time. Do you have any further information for our readers here at NeuFutur?

Olga: Thank you for your support and stay tuned for more.

Igor: Don’t be square, be there.