Ted’s Montana Grill is an upscale dining establishment; we were ecstatic when we were invited in for a meal. The restaurant is decorated in a late-19th / early-20th century format, eschewing the big screens and less formal aspects. What ultimately is presented is a comfortable, accommodating restaurant that has enough variety in its menu to appease young and old alike. 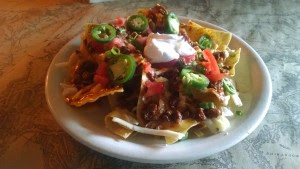 We ordered the bison nachos to begin the meal. The tortillas were thick and large to accommodate the two types of cheese, jalapenos and bison chili that were liberally placed on the plate. The nachos were enough to sate us before our entrees were delivered.

I ordered the Canyon Creek, a burger (available in beef or bison) that links together cheddar, bacon, jalapeno, a fried egg and blackberry jam into a varied experience. 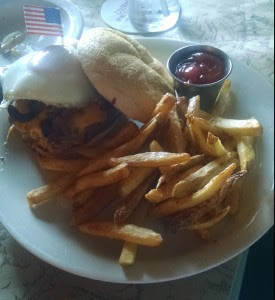 The fried egg was cooked properly, oozing out slowly after the first bite. The bacon was crispy but pliable enough to add a different mouthfeel to the burger, while the jalapeno and jam united to create something that was simultaneously spicy and sweet. The Bison pot roast was tender and succulent, with enough in the way of gravy to cover the included potatoes. The carrots were a little on the crisp side and could have stood to be placed in the steamer for a few extra minutes. 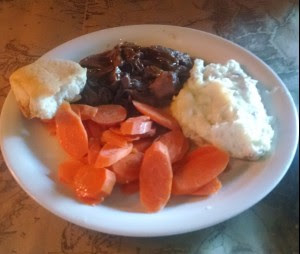 The portion sizes of the entrees were enough to ensure that we had enough to bring home, but we forged bravely on and order the strawberry shortcake from their dessert menu. Ted’s Montana Grill stepped up their game with this deconstructed dessert, utilizing drop biscuits as the top/bottom of the shortcake. Fresh strawberries and sauce were drizzled over the biscuits and the ice cream comprising the middle of the dessert. This meal-ending plate would easily feed two but could easily be stretched to a family of three or four. 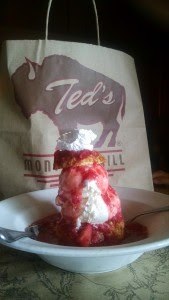 Sustainability is a core tenet of Ted’s Montana Grill, from the biodegradable paper straws to recyclable paper on the tables. The bison used in a number of the restaurant’s dishes is a sustainable food source owing to intelligent herd-raising practices. Ted’s Montana Grill locations are available throughout the majority of the Midwest / east coast, Colorado and Montana. A dinner for two will typically run about $30-50, with appetizers and desserts each adding around $6-10 to the total bill.