The eponymous opening to Thirsty’s album showcases a dreamy set of vocals and a tight rock arrangements that works well in a variety of styles. Hints of sixties and seventies rock can be discerned as the vocals approach that of Bob Dylan and Mick Jagger. 10, 7 And Possibly 6 has a funky groove that succeeds based on the drum / guitar dynamic. Bits of blues music can be picked out here as Thirsty makes a track that links together Tom Petty with Talking Heads; the harmonies achieved here will tattoo themselves deep into the minds and hearts of listeners. 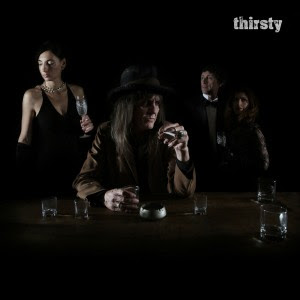 God Bless America is a touching and intimate track that succeeds based on the additional vocals. I feel that the depth that is achieved during this effort provides considerable depth to this album, ensuring that listeners will be on the edges of their seats. The production shines through brightly during this album, meaning that the constituent elements of Thirsty can shine on their own and as a cohesive act. Flawless has the vocals take on hints of Mike Ness and Lou Reed to create further variety for the album.

The distinctive percussion presented to listeners on this track make for a wholly different experience than had been present on earlier registers. The penultimate effort on this self-titled release is darkly emotive and strips things down to their base level. What results is a tremendously effecting track that is entirely immersive; it dovetails with White (the last composition on this release). White winds things to a neat end. The wide-open spaces created by Thirsty tie together hints of Pink Floyd as Thirsty provide a memorable ending to one of the most compelling albums that we have heard this year.