Misli opens up OLYA’s Utopia album, and it comes forth with an early eighties sound that gradually fleshes itself out to a Lady Gaga / Katy Perry sort of vibe. The crispness of the instrumental compositions here separate Misli from other pop fare, ensuring that listeners can spin the track a number of times before hearing every inclusion and dynamic established in the introductory three minutes. 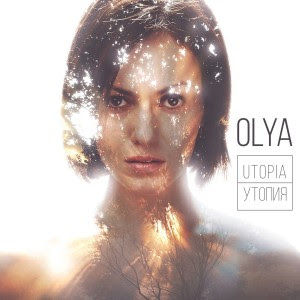 Lift Me Up is a track that is built off of little more than OLYA’s vocals and a piano; the considerable complexity of the vocals here make for a much more deep and effecting track. The shift that takes place in the second half of the track is wholly unexpected and will keep listeners on the edges of their seats.

Under My Control has a number of elements that are present – OLYA’s vocals, synth lines, and a driving beat – that are able to unite to create something wholly engrossing. The aforementioned vocals build off of the framework established by Christina Aguilera and Madonna

Crash and Burn keeps the energy high as this EP begins to spin to a close. The ferocity of OLYA’s voice possess some of the metropolitan sound of a Brosnan-era Bond theme while having just enough tenderness to keep listeners focused into every note that is presented. A punchy beat allows the momentum to remain high as Ne Zrya begins. Ne Zrya showcases the high points of the Utopia while giving listeners some semblance of where OLYA will go on subsequent recordings. For more information about Utopia, the latest information about this unique performer, and anything else that may be released in the future, add OLYA on Facebook.

Top Tracks: Crash and Burn, Under My Control


OLYA Utopia CD Review
Posted by NeuFutur Magazine at 8:54 AM