Boardwalk Empire is a rare example of a show that has continued to get stronger as the seasons have passed. The third season of the show captures from New Year’s Eye 1922 and the months that follow, as Gyp Rosetti makes eir grand entrance. Throughout the season, Gyp continues to be a major stumbling block for Nucky as tensions continue to escalate. Nucky stands tall at the end of the series, but experiences a major setback in eir personal life.

HBO has provided a number of additional features to this set, including a set of news reels from the 1920s and 1930s, many of which have considerable relevance to this season. For those individuals that are interested in the lore of Boardwalk Empire, a featurette provides additional information about Billie, Dean, Gyp, Benny, and Gaston. Further information about the creative and filming processes of the show can be viewed with both “Scorsese on Season 3” and six audio commentaries. Valuable insights accompany the commentaries, as Steve Buscemi (Nucky), Bobby Cannavale (Gyp), Terence Winter (show creator) have intimate discussions. This view inside is completed with the inclusion of the “Director’s Chair” featurette, which allows directors Coulter and Van Patten ample opportunity to break down a number of scenes into constituent part. Specific decisions are explained, while a final bit of context will provide viewers with the information that they need to understand all the events occurring in the third season.

The Complete Third Season set of Boardwalk Empire can be purchased at a variety of online and physical retailers. Expect to pay around $45-55 for a copy. Boardwalk Empire will start its fourth season on September 8th. 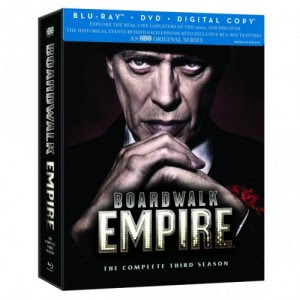