Neverwinter is a free-to-play MMORPG that represents a well-polished combat and profession system alongside the sheer amount of lore that exists in the Dungeons & Dragons universe. The title has enough different twists and turns to it that players wille asily be able to log hundreds of hours onto the title. Furthermore, Neverwinter caters to both experienced and new players alike. For example, the map system is intuitive on its own, but there is a sparkling path that players can utilize that shows the way to the next part of a quest.

Players can choose to play as one of five character classes – Control Wizard, Trickster Rogue, Devoted Cleric, Great Weapon Fighter, and Guardian Fighter. The differentiation between the classes is strong, blending ranged and melee attacks, with magic spells and physical weapons. To add further variation to a player’s experience on Neverwinter, there are a wide array of races (Tiefling, Half-Orc, Halfling, Dwarf, Drow, Wood Elf, Half-Elf, and Human). Players can play Neverwinter as a single-player-styled campaign or use the guild system to make the title a little easier. What I liked the most about Neverwinter had to be the professions system. Players are allowed to choose one profession (Alchemy, Tailoring, Leatherworking, Mail/Platesmithing, and Leadership) and

Neverwinter can be downloaded from the Perfect World website. The sheer number of players makes the frame rate slightly smaller in places like Protectors Enclave, but there is no decrease in video quality when one is in a 5-man or a raid instance. The sheer amount of things to do on Neverwinter ensures that it will be the MMORPG of the summer, and Cryptic Studios has provided the title with ample legs to make it last for a considerable time after that. 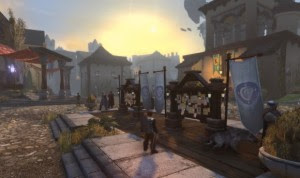 Neverwinter PC Review
Posted by NeuFutur Magazine at 8:29 AM