Strike Back is one of the hottest shows, and this DVD set (capturing “Strike Back: Vengeance” for those familiar with the British airing) does the show justice. The second season improves on the story that was laid out in the initial collection of episodes, providing some much-needed back story to Michael (Philip Winchester) while providing further drama. The show introduces a new boss for Michael in Rachel (Rhona Mitra of Shooter, Underworld) through the season’s 10 episodes. The overarching plot of season two surrounds the search for nuclear triggers in the exotic wilds and cityscapes of Africa. The show does a great job in tying together the spy and military genres, all while having the same attention to detail that a police procedural or mystery show would require. During the season, a bountiful amount of guest stars keep things fresh. Eamonn Walker (Oz, In Sickness and in Health), Nick Reding (The Bill, A Touch of Frost), and Shane Taylor (Devil’s Playground) all turn in stellar roles during this season. 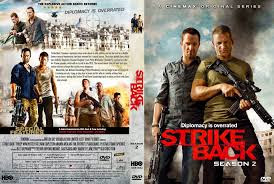 There are a number of bonus features that are included on this box set.  Aside from the bonus DVD of Banshee, each box set includes a commentary laid down by Winchester, Stapleton, Holmes, and other cast and crew. The commentary does well in providing viewers with a sense of the camaraderie enjoyed by the cast and crew, along with further context of the character’s motivations.

Make sure to purchase this DVD set from online or brick and mortar retailers; shoot for a price of around $30-35. The show resumes in mid-August and can be viewed in the United States on Cinemax.