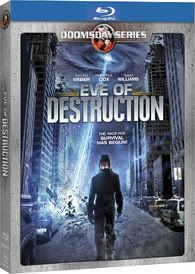 Eve of Destruction is an epic mini-series (which had an initial airing back in June, on the ReelzChannel) that details the construction of an energy plant that will solve the pressing issue of energy generation. When a set of ecological terrorist decide to throw a wrench in that research, what was a boon for humanity turns into a tremendous bane. Eve of Destruction is built off of the contributions of Aleks Paunovic (BSG, Arctic Air), Christina Cox (Defying Gravity, Blood Ties), and Steven Weber (Wings, the Dallas reboot). In this three-hour release, viewers will get into rooting for the ragtag band as they strike out against the tremendous force of nature and reality.

The quality of the special effects is perfectly passable for the film, while the cast and crew unite to make for a realistic set of relations even with the off-the-wall settings that are utilized here. Director Robert Lieberman (Fire in the Sky, Breakaway) is able to create an immersive environment, striking up that bit of fear in viewer’s hearts that what is detailed here could honestly happen. This point is especially prominent when one views Eve of Destruction in light of the Fukushima nuclear accident.

The sneak peek of another Vivendi production (Cat. 8) will pique the interest of Eve of Destruction.  The video and audio quality of this release is utterly superb, with realistic colors and an audio track sharp enough to discern every line of dialogue and ambient noise. Make sure to check out a copy of Eve of Destruction from any well-stocked physical film retailer or from a variety of online movie stores.