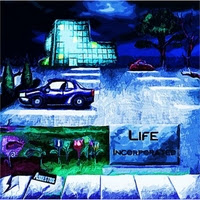 Life Incorporated begins after a brief introduction, which soars on intricate time signatures and an overall arrangement that puts the drums as a focal point to the band. Life Incorporated continues with Liability, an effort that is reminiscent of artists like Rites of Spring, Strike Anywhere, and early (pre Girl’s Not Grey-era AFI). There is greater emotionality and narration going on during each of the tracks on this album than in similar efforts. The Asbestos are able to look back into the early eighties with the Dead Kennedys and The Cramps during The Cop Theory. The band is agasin able to adopt the trappings of Nitro acts with a slight hint of Baghdad-era The Offspring.

Jesus Was No Commando slows things up considerably, with a brooding instrumentation providing considerable gravitas to the effort. During Jesus Was No Commando, The Asbestos are able to foster a gritty and guttural sound the builds off of seventies rock. The final of three longer tracks (Destroy the Wall is over ten minutes, Jesus Was No Commando is 8-plus), Sell Out Police is an epic journey through the variety of styles and approaches that have influenced The Asbestos. Sit down and give yourself an hour or so to digest what is happening during Life Incorporated, as the band has crammed each composition is a fashion similar to James Joyce’s Ulysses.

Life Incorporated is an album that showcases considerable variation, while The Asbestos are a band that can continually innovate and make each different twist and turn their own. Visit The Asbestos’ website for more information about the band, a method that one can purchase Life Incorporated (the album is also available at Amazon and iTunes), and further news and updates from the act.

Top Tracks: The Cop Theory, Jesus Was No Commando

The Asbestos Life Incorporated CD Review
Posted by NeuFutur Magazine at 5:35 AM