Hello, eM. In a few sentences will you provide some information regarding your musical background and career so far?

I started singing at 6 years old in choirs then learnt piano, then clarinet.  I started singing solo in a school band when I reached 13. Over time I sang country then rock and started listening to EDM music in my late teens. I’ve been involved with acoustic duos to singing with house/trance djs, running small club nights to doing voiceovers on commercial and community radio. Can you describe your creative process and your recording set up for us? How did your latest single, When You Were Here move from initial thought to finished effort?

I usually start with a melody/vocal and build a track around this. I have my own recording set up at home so I spend many hours locked away in the room. Producing is such an art, I still feel like a ‘baby producer’! 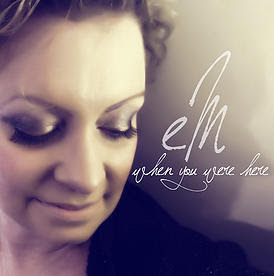 Funnily enough with When You Were Here, I imported a midi part sample I had, played around with the chord progression and put the vocal down within half an hour!  It was a matter of then getting the mix right for mastering which took me a few more days.

Who has influenced you as a musician?

I sang Madonna songs at school and her earlier albums really influenced me. The first time I listened to Kate Bush and Sinead O’Connor, they both blew me away with their conviction in their songs. Sinead’s ‘Troy’ is one of my fave songs. Her voice is one of and Kate Bush wrote about anything and everything. Her eccentricity was well before its time. Over the last few years my influences in EDM production have been Zibe, Eric Prydz, Cid Inc and 16 Bit Lolitas. They all have such flawless production and this inspires me with my own music. I listen to a lot of EDM artists too like: John Digweed, Tiesto, M.I.K.E, Paul Van Dyk, Faithless, Lemon8, the list goes on!!!

In a related vein, you just released Craig London’s remix of When You Were Here. What is different between your original tune and the remix?

My original mix is a straight melodic ballad, Craig sent his piano part which I’ve used but as a minimal part of the song. Craig’s remix has the piano has the main groove and takes my original intent of the song to another level. As soon as I heard the finished remix, I HAD to do a video for it.  I shot the video with my video editor and had the video edited and finished on Youtube within 24 hours.  I’m ecstatic of how the remix and video have both come together so well.

How do you feel that Australia differs from the rest of the world in terms of musical tastes and culture?

I think musicians here often will look to Europe or America for influence. I get sent dj mixes all the time so I listen to a range of EDM music particularly from Europe. This all helps me with my own song writing.

Do you have any particularly interesting stories about your travails as a musician?

The most frustrating thing in the music industry is that it seems to be about image and hype rather than quality of music. Anyone can download a music program, watch a few tutorials then produce a track. However what many forget is music is an art and takes time often years to perfect. My idols have been doing this for 15-20 years and I strive to have that same quality that is in their music.

How can listeners locate samples of your music and keep up to date about your latest news?

I will have another new single and video released in 3-4 months. This one is a bit more upbeat, a ballad kinda electro/progressive with a strong vocal. I am also working on my 3rd album ‘Out of the Darkness’ which reflects the last few years with my battle with Crohns Disease and the end result is that I am healthy and well. All of my new songs are very melodic with lots of harmonies and deep lyrically. I am also using guitar lines and piano more in the new songs to give it all a bit more of an organic sound.

Finally, do you have any more thoughts for our readers at NeuFutur?

With over 50 songs/collaborations on Beatport, I feel I have only just begun! Watch this space, I have many more songs to share with your readers and the world!