There is a timeless sound to Nikia’s Maybe I single, which is versed in the soul and funk of the seventies, the post-disco 1980s, and the rich female-led R&B of the 1990s. The production of this track allows the instrumental and vocal sides of the composition to shine on their own and together, creating something that will resound with listeners long after the song has ceased playing. Nikia’s vocals are strong enough to keep listeners on the edges of their seats, but the inclusion of a secondary set of vocals provides Maybe I with more than enough momentum to end strongly. Aside from Nikia’s vocals, the drum / guitar / bass dynamic that is created during Maybe I is a high point. 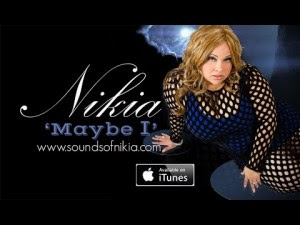 There is a luscious and luxurious style that is crafted here that simply is not heard during other radio-ready singles. Fans of pop, R&B, soul, and of solid music generally will be able to put this track into high rotation; the depth of the composition here is such that new twists and turns will reveal themselves even at the fifth or tenth listen. I feel that the track occupies a much larger place than its three and a half minute run time would indicate; the complexity of Maybe I means that those fans of the music will have something to devour, while those looking for a catchy song will be able to have something delectable.

For more information about Nikia, the video for Maybe I, and tour dates, make it a point to visit her domain at www.soundsofnikia.com/ . Keep an eye on NeuFutur for our upcoming interview with this bold new performer.