Immortality is Saranac Brewing’s imperial amber ale, and it pours with a mahogany to ruby red coloration and a small amount of white head that lays on top of the beer. The beer has a small amount of malt and hop nose initially, and one’s first experience with the beer will yield small amounts of dark fruits, a light alcohol bite, and a good amount of wheat, cereal, and malt taste which follows. Immortality warms imbibers up while standing up well from beginning to end. The light amount of sweetness that can be discerned at points is a good counterpoint for the sharp hop presence; one can taste the hop but Immortality does not consist of a single note. 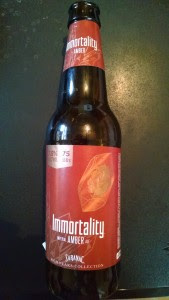 As one crosses the halfway mark of Immortality, cloves, cinnamon, and cayenne pepper become more prevalent. It is this scintillating set of flavors that make Immortality into a solid effort. I feel that a number of ambers (and imperial variants) suffer by the inclusion of too much sweet without ratcheting up the hop presence. Immortality is able to find this balance and create a modern amber that is eminently drinkable and varied enough to stand up to repeat sessions.

Check out our Saranac Legacy IPA review for our coverage of another Saranac brew, while additional information about the rest of Saranac’s year-round and seasonal offerings can be located at their domain. The brewery’s Twitter is a good source of information about festivals the company will be attending, new products, and tap takeovers.