Destihl has created an India Pale Ale in their Vertex IPA that is able to pop with a considerable amount of hop without overwhelming imbibers. The beer hides its 76 IBU well, pouring with a hazy dark-brown to orange and a nose that does not lean too far into the bitter side of things. When one takes their first sip of the Vertex IPA, citrus and apricot are common along with a strong hop twang at the backside of the quaff. There are smaller notes of grain and malt that can be discerned at the periphery, but this India Pale Ale is pretty straight-forward in the fruit / hop dichotomy. This duality ensures that the alcohol content is hidden perfectly, making the Vertex IPA into something that can easily be downed. 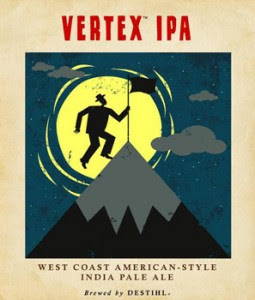 With all of the session IPAs flooding the market, it has become an errand to find an IPA that is a hop bomb; Vertex is one of those beers that fans of the style will absolutely adore. For those that are just looking to put their toe into the pale ale waters, the flavors that are encapsulated here may be a mite too big and bold. This effort by Destihl is something that should be searched out and drank around bonfires, paired with beef, lamb, fish, and chicken (and cheese for vegetarians, / nuts for vegans). While Hoperation Overload is the brewery’s double/imperial IPA, I feel that the intensity of the hops here is even greater than HO; pick it up today.

For information about the full range of Destihl offerings, visit the brewery’s domain. News updates and events are found at the brewery’s Facebook. We have reviewed Destihl’s Counter Clockweisse and Abbey’s Single in the last year.