Canis Mexicanus is a spiced version of Wolf’s Ridge Russian Imperial Stout, Dire Wolf. The beer pours with a dark brown coloration and only the smallest in the way of head. The initial nose of Canis Mexicanus is heavy with chocolate and a hint of cayenne pepper. The first sip of the RIS will yield an assertive cinnamon, cayenne, and black coffee set of flavors. After a few moments to open up, Canis Mexicanus starts to yield sweeter (Mexican chocolate drink) elements. The spice does a tremendous job in hiding the considerable alcohol presence, along with making the effort’s mouth feel much heavier than it seems. Canis Mexicanus would be a perfect beer to sit and sip, but I feel that it would work well with strongly-flavored cuisine, nuts, and cheese. The stout is interesting as it uses vanilla differently than in any offering we’ve tasted. Where in many cases, the vanilla one tastes is the familiar sort of taste that one will experience in ice cream, there is a nuttier and more in-your-face expression of vanilla to be experienced in Canis Mexicanus. 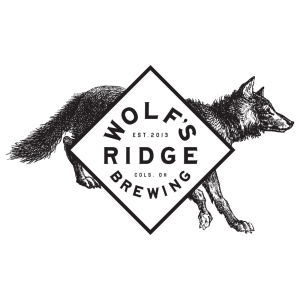 Dire Wolf Canis Mexicanus was available for a very limited time, but individuals may be able to find a few bottles kicking around locations in Columbus. If you find yourself downtown (215 N. 4th St), Wolf’s Ridge operates a restaurant and a taproom that have a wide array of different expressions from the brewery. Keep an eye on NeuFutur Beer for our coverage of Wolf’s Ridge’s Dire Wolf.