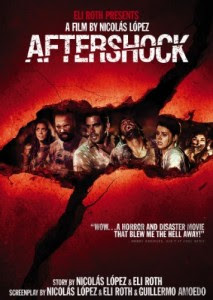 Aftershock falls into the natural disaster genre, and unites famous actors (Eli Roth, Andrea Osvart of Transporter: the Series) with up and coming ones (Lorenza Izzo, Patricio Strahovsky). The movie is set in Chile, where a band of friends have their vacation interrupted with a society-shattering earthquake. In the chaos that ensues, humans are pushed to their breaking point. The trappings of order are destroyed as inhabitants attempt to make sense of this horror.

The video quality of the Aftershock DVD is sharp with realistic skin tones and lighting. The audio is perhaps what makes the film, as the realism of storms and natural torment will have viewers’ hearts beating quickly. The DVD comes with a number of bonus features, which include a gag reel that seems to stand at odds with the somber tone of the movie. The release’s value is ratcheted up with the inclusion of a behind the scenes featurette, which really imparts the sheer amount of work that went into making Aftershock into a taut title.

Aftershock is a solid title, perfect to pick up for a late night or date with a significant other. If the events that unfold here seem a little hard to believe, the film was based on the events that occurred after the 2010 earthquake that occurred in Chile. This film also has a Blu-Ray release; individuals should be able to purchase a copy of Aftershock on DVD for around $13 and $15 on Blu-Ray.