Pale ales have been largely passed over with the popularity of India pale ales, but Oskar Blues’ Dale’s Pale Ale looks to establish a renaissance for the style. Whether in cans or on tap, the Dale’s Pale Ale has more of a backbone than competing efforts. I feel that it is the vigor and spirit that makes for an inimitable beer. The initial pour provides individuals with a fairly thick, off-white head. The vibrant orange of the brew itself is inviting, as is the first sip. This opening links together slight hop flavors with fruit and a malt backbone.

With subsequent sips, additional bitterness is present; Dale’s Pale Ale maintains its flavor even as it gets warm. The 6.5% ABV of Dale’s Pale Ale puts it at a level all it’s own; where many common beers weigh in at around 4.5-5.5%, the additional alcohol allows Dale’s to moderate the hops and malt with a slight alcohol burn. One of the freshest beers that we have had the chance to review, Dale’s Pale Ale is the beer to drink throughout the end of the summer and into the beginning of autumn.

Check out the Oskar Blues website for more information about the company’s brews and upcoming releases. Dale’s Pale Ale is a perfect introduction for those that are only familiar with macro brews, while still having enough of a backbone to keep those experienced in beer happy. 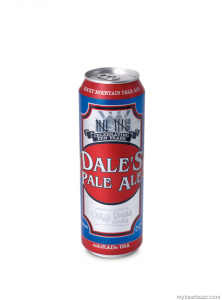