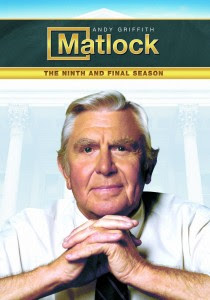 The episodes present in the ninth season of Matlock showcase the lawyer at eir finest, helping provide counsel in an inimitable way. A variety of premises are broached with these episodes, including murder, abuse of authority (The Deadly Dose), bank robbery (The Getaway), and rekindled love (The Verdict). The video quality of the episodes is stellar, ensuring that viewers are confronted with a sharp picture and audio so clear that every line of reason and bit of dialogue can be understood. The experience provided by these uncut episodes is substantially greater than even the original airing of the show; there are no commercials or interruptions here.

This DVD set includes one bonus feature, which are thirty-second teasers for each of the season’s episodes. Matlock The Ninth and Final Season can be purchased from a variety of online and physical retailers for around $33-35 a set. Previous seasons of the show can be purchased for about $15-35. CBS has provided viewers with a very cheap option to relive one of the most memorable television shows of the eighties and nineties; it will be enjoyed as an everyday gift just as much as it would be as a stocking stuffer.


Matlock The Ninth and Final Season DVD Set Review
Posted by NeuFutur Magazine at 4:55 AM