Fridays: The Best Of Review

There have been some strong contenders to the dominance of Saturday Night Live. SCTV was able to fight the valiant fight in the 80s, while Kids in the Hall and MadTV provided a different option for the 90s. Fridays was the first of these shows, and showcased the work of a slew of comedians before much of America would become familiar. The show aired from 1980 to 1982 and brought a spotlight to the careers of Rich Hall, Larry David, and Michael Richards.

The quality of these clips is stellar, providing a viewer with quality comparable (if not in excess of) to what was presented during the initial airing. This becomes especially impressive when the musical acts begin; this DVD set includes tracks from KISS, The Cars, Devo, and more with lush and compelling sound. The various skits presented here (Nat E. Dred, the pharmacist at Drugs-R-Us) showcase a little more edginess than was present on other comedy shows of the period. The DVD concludes with a number of bonus features – a reunion with the cast, some photos from the show, and a brief look into the Andy Kaufman incident – that provide further context to what is a comedy relic.

For those individuals that wish to see the entirety of the Friday episodes, make sure to pick up Fridays: The Best Of. With hours upon hours of footage provided at a value price (individuals will be able to pick up this DVD set for around $29-35), this release should be an immediate purchase for anyone that was a fan of the show or would like a proper introduction. Try to pick this one up from online retailers and let us know what you think! 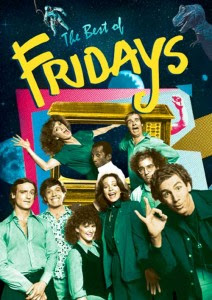 Fridays: The Best Of Review
Posted by NeuFutur Magazine at 8:56 AM