The  Suicide Machines bring another twist with this new album, slowing down the tempo, but they still keep the sense of good-naturedness with the single “Sometimes I don’t mind”, which is a paean to a dog. A psuedo-Ramones track is thrown in with “Permanent Holiday”, from the topic of the song (Rebelling and Running Away) to the Ramonish pitch of Jason Navarro,.All and all this CD shows the Machines experimenting and leaving the ska style that once made them famous, with indy songs like “The Fade Away” and pop-punk ditties like “Sometimes I dont mind”. “The Fade Away” rings a violin into the mix, while “Too Many Words” brings out the supreme bass lines of Royce Nunley. “Green” has a wonderful chorus but fails to break new group, using typical pop-punk guitar lines. The anger exhibited in the Machines prior albums have manifested themselves into a semi-romantic mood, playing a major part of this latest album. “I Hate Everything” should be hated for every reason. One is the ICP like delivery of the vocals, and the overdone topic of the song. However, the Machines weren’t the only “Ska” band to go into the rap/metal genre for a song. Others include the O.C. Supertones hit “Escape from Reason”, which is only a little bit better then “I Hate Everything” . However, “I Hate Everything” is the only low point to a great album . 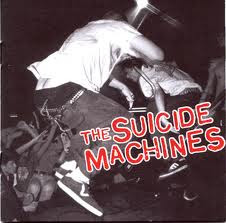