For those that are not familiar with Robert Williams, ey was a prolific artist that contributed greatly to a variety of art genres. Whether it was the time that Williams spent with R. Crumb (The Fabulous Furry Freak Brothers) or Guns ‘n’ Roses (created the front cover art for “Appetite For Destruction”), Williams’ art was one of a kind. The role ey occupied in the overall direction and focus of the art world has been understated, and Robert Williams: Mr Bitchin’ is a documentary that looks to capture the sheer breadth of Williams’ fame.

The documentary lays out Williams’ earliest years, and provides a solid look into the eighties, a high point for Williams’ career. The number of stars that are interviewed for this documentary are substantial, with Deborah Harry (Blondie), Slash (Guns ‘n’ Roses), Anthony Kiedis (Red Hot Chili Peppers), and even Ed “Big Daddy” Roth sit down to provide their memories of Williams. Providing that extra half-hour to the documentary when compared to public network releases allows for viewers to gain an increased amount of information about Williams.

Robert Williams Mr Bitchin’ can be purchased from well-stocked brick and mortar stores and online retailers alike. Look to spend around $15 for a new copy of the DVD. Check out the Cinema Libre website for more information about new and catalog releases alike. 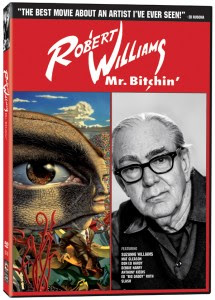