Abomination is an intense track that stands at the juncture between punk, metal, and hard rock. Wiseguys ‘n Scallywags kick things into high gear early, linking together an absolutely brutal sound with an emotional florish. Better Off Undead is a track that touches upon The Early November and Brand New as much as they take up hints of AFI and early Avenged Sevenfold. The disc hits a new high with Saddest Story Never Told, a track that pushes forward an absolutely unique style. One needs to hear the track to believe it, as a set of Our Lady Peace meets Taking Back Sunday vocals are bolstered by an industrial / trap percussion.

What It’s Like to Die will appease fans of Social Distortion, the Nekromantix, and even My Chemical Romance fans; the bouncy beat of the track ferries a vibrant narrative through the entirety of the cut. Bubblegum Jazz is a major stylistic shift for Wiseguys ‘n Scallywags, but is contextualized perfectly through intelligent arrangements and the same bleeding-edge style that is threaded through this album.

Funkasaurus Rex vs. the Funkness Monster is the final track on the album, showing well that Wiseguys ‘n Scallywags are creating stellar music until the end. Where there is a tendency to put weaker tracks at the later registers of an album, the band is able to continue to evolve and change their style until the end. Add the band on Facebook for further information about their upcoming album, and purchase the self-titled release at the band’s CDBaby store (www.cdbaby.com/cd/wiseguysnscallywags) . 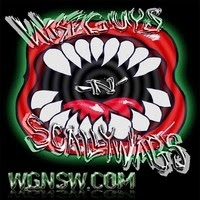