Lars von Trier has created this two-part film to build off of the story originally created in his previous film, Melancholia. This four-hour release is an intense character study that possesses a scintillating narrative and enough plot to keep viewers on the edges of their seat from onset to completion. The first volume of Nymphomaniac has considerable star power, with roles turned in by Shia LaBeouf, Uma Thurman, Udo Kier, Christian Slater, and Charlotte Gainsbourg. The film surrounds the interaction between Seligman (an older gentleman) and Joe (the titular nymphomaniac) , a makeshift couple that take a trip deep into Joe’s previous sexual relationships. The second volume of Nyphomaniac takes things in a darker format, allowing von Trier to elicit the acting skills of Willem Dafoe, Jamie Bell, and Mia Goth. The combined release contains both volumes of the film and a number of additional features. There are full theatrical trailers for each volume, while the AXS TV: A Look at Nymphomaniac featurette goes into detail about the creative process of Nymphomaniac, with a decided focus on the behind the scenes aspects of the production.

The film is great because it frankly and honestly deals with sexual situations in a way that few films have dared to try. There is sexual activity in this film, contextualized through the progression of the overall narrative.  What results here is the creation of a foundation that should be adopted by films that wish to reach the same clarity and realism required to accurately portray humanity in the early years of the twenty-first century.

The DVD can be purchased for around $27, while a Blu-Ray will cost around $30. The release should be found at well-stocked video stores and at myriad of online retailers. 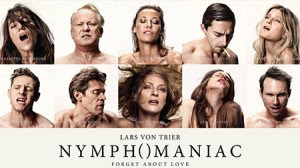 
Nymphomaniac Volume I and II DVD Review
Posted by NeuFutur Magazine at 7:56 PM