Superfix is a Los Angeles-centered band that features Kalen Chase (formerly of Korn) that is poised to take the hard rock genre by storm. The Lion’s Storm has sharp guitar work, emotive vocals, and a drum line that is authoritative and ground-shaking. There are hints of A Perfect Circle, Deftones, and Incubus here even as the guitars continually set the act in bold new directions. 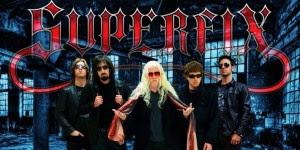 Of particular note in Superfix has to be Jonas Blomqvist, which is the glue that holds the band together. More than merely crafting large parts of the instrumental arrangements for Superfix, Jonas’ backing vocals provider a fullness for the band’s compositions that allows them to stick around long after the track has ceased.  On compositions like Cry Wolf and Soul Survivor, Jonas’ guitar work shines through brightly. Cry Wolf is a track that showcases the spontaneous nature of Superfix, with chugging guitar lines that rapidly yield ground to ropy bass lines and in your face drum strikes. The cherry on top of this sundae has to be Kalen’s vocals, which are pushed to an entirely new plateau through form-fitting guitar lines. What is particularly impressive about Superfix has to be the complexity that the band inserts into each track; the interplay between each separate element provides considerable replay value as listeners attempt to dissect these dense and fulfilling compositions. Mind slows things up, allowing Superfix ample time to craft a brooding and darkly emotive composition. As was the case with Cry Wolf, Mind is an effort that has the band tackle a wide variety of styles. Jonas’ guitar work during Mind are reminiscent of Corrosion of Conformity and Megadeth, allowing Superfix yet another tool in their repertoire.

Make sure to visit the band’s website at www.superfixband.com for information about Superfix, further updates about their music, live dates, and the wide array of their merchandise. The band also maintains an active profile on Facebook (  www.facebook.com/superfixband ), Twitter (twitter.com/superfixband) , and ReverbNation (www.reverbnation.com/superfixband ). If you are in the Los Angeles area on August 3rd, make sure to visit The Canyon to see Superfix perform alongside Queensryche. Here’s to hoping the act will be able to create a full length album that expands upon the styles and unique qualities that were originally broached during efforts like Soul Survivor and The Dream. Superfix is an act that looks to redefine what hard rock and metal bands can do and succeeds each time they cut a track.