The AJAY Project "You Made Me" Single Review

The AJAY Project has just released their first track, You Made Me, on Mother’s Day. You Made Me is a track that The AJAY Project has written as an ode to mothers. The tremendously emotional track touches upon the work of Seal, R. Kelly, and mid-nineties R&B while having a classical fullness that makes the track unforgettable. 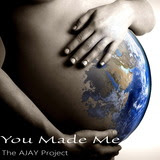 While the track’s meaning is simple and heartfelt, I feel that the underlying intensity and complexity of the instrumentation provides considerable replay value to the release. There are multiple voices that command the focal point of the single, but the front-center aspect of the male vocals (laid down masterfully by Everett Ryan) are the most earnest and memorable here.

For those that are fluent in Hindi, The AJAY Project has released a Hindi and a Multilingual version of the You Made Me single. The track can be purchased from iTunes, with the proceeds raised from the track being sent to ten worthy charities throughout the world. The AJAY Project’s Facebook is updated on a regular basis to discuss the latest news and track releases from Satsangi.


The AJAY Project "You Made Me" Single Review
Posted by NeuFutur Magazine at 5:12 PM