Suddenly is a single released by New York City’s Dalal. The track links together pop and dance genres to create something that could easily make it onto radio rotation. Dalal’s vocals are influenced by Britney Spears, Lady Gaga, and Madonna. The backing instrumentation is steeped in EDm and dance music, ensuring that fans of the eighties, nineties, and current decades of dance music will have something that they can sink their teeth into. The vocal and instrumental elements of Suddenly unite to create an effort that resounds loudly with listeners, even after the track has ceased. I feel that Dalal’s vocals are the reason for this, as they pull double duty during this cut. While there is a strong narrative element to Suddenly, Dalal’s vocals unite with the synth and percussive elements to create a much more complex and fulfilling arrangement. The track may only be three and a half minutes, but I feel that there are enough twists and turns presented in Suddenly’s run time to keep the replay value of the song high. 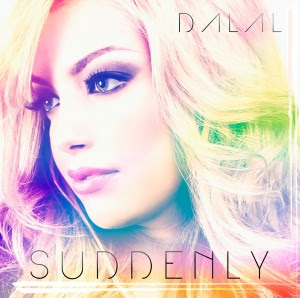 Make sure to purchase a copy of the Suddenly single from iTunes, and add Dalal on Facebook for additional information about new tracks, radio placement, and other Dalal-based news – I know that I would love to hear a set of remixes for the song just to see the different contexts in which it would succeed. Here’s to hoping that Dalal’s follow-up single will be as strong as Suddenly, as this introductory effort is impressive.