1) Let It Go is your latest album. What does it contribute to the story of Eileen Carey, the performer?

I think my music has always had an upbeat, life is good if you just choose to let it happen message in it. It is a personal choice whether to embrace it or not. All my music advocates that embracing….Possibilities 2002, Hearts of Time 2005, Movin On 2009 and now Let It Go.

In the context of your question, I would have to answer that I am sticking to my guns about the messages of faith, hope and doing it; and my music carries that message in the new CD. I am a woman of my word. Do not flip-flop about my beliefs and advice. So in some case this CD is more of the same. A renewal of my commitment to my ideas. Musically as well actually.

2) Which tracks off of Let It Go are your favorites, and what about the efforts make them? 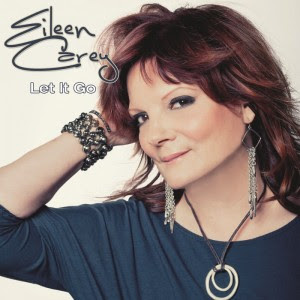 I am a singer as well as a songwriter…different tracks on this CD are favorites for different reasons. I love my cover of Martha Davis’ 1982 hit with the Motels, “Only the Lonely.” Travis Allen Childress, my producer, nailed the ambience of the song. Obviously the first single off the CD, “Let It Go,” who I wrote with Kathryn Grimm has special meaning to me. It is, being the title song, the summation of this album’s specific positive theme.

But I am really excited about the just released second single, “Bottle Your Crazy Up.” Here’s the scene of the song:  One woman is telling another not to rebound from a bad breakup too hard and too fast.  And here’s what she advises:

“ Don’t order the tequila, ‘cause you know how you get, Don’t talk about your ex, you ain’t over him yet, You can wear the short skirt, but I’d forget the heels,  And don’t go on about how you feel. . . . Bottle your crazy up!” 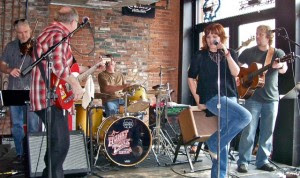 3) What artists possess the greatest influences on your music?

Well, I am going to start off by listing some of my favs that I have sung as well here: Patsy Cline’s “Walking after Midnight”; Chrissie Hynde & the Pretenders’ “Don’t Get Me Wrong,” also on this Let It Go CD. I always admired Cheryl Crow and did the only version of a Keith Urban and Vernon Rust tune on my last CD Movin On. Songwriters like Diane Warren. I already mentioned “Only the Lonely, and Martha Davis…but also the Beatles, yes the Beatles. I grew up in a suburb of Cleveland playing drums and that had an influence on the tempos of the music I sing.

Didn’t think of my music as “country” specifically, but right from the start country radio picked me up for “That Town”. It originally went to AC but country radio promoter Gene Kennedy picked it up and it got airplay across the country stations.

4) How has your style evolved and changed over the time since your first album?

Music gave me a way to express myself and share what I have learned and what I still hoped for. I am a better singer-songwriter today, but as importantly my style has become more diverse and refined. Let It Go is my best work. Thematically similar to the past, but much more open and fan orientated. We use horns on this record and I even sung a real pop tune in “Walking on Sunshine” that old (late 70s) Katrina & the Wave song. I am country, but I just couldn’t help testing my reach on that. Been performing it on stage lately, and I get nervous every time it comes up in the set; but the response has been gratifying, especially at the Fairs and Festivals where I perform to very diverse crowds on both coasts.

5) Can you describe your creative process and your recording set up for us?

Well, when I start thinking about what is on my mind that needs being said, I start writing songs and looking for material that I identify with and is a challenge for me to sing.

The avenues that my material comes from is as diverse as is my tastes. If I am singing and arranging another songwriter’s song I make it mine. Generally as “Country” as possible. Lyrics are a key element in what I choose to sing.

When I have written or chosen the material I go to Travis and we arrange it so we can send it to these Nashville studio musicians, who have been recording the basic tracks on my music for years now.

7) Do you have any live dates or performances that you are promoting?

Still filling in upcoming dates to go along with a September 22nd to the 26th whirlwind 5 five days running radio and dance club tour for the new single “Bottle Your Crazy Up,” now booked in Tennessee, Kentucky and Alabama.

I am, with other concerned animal and cat lovers, going to produce a feral cat adoption fundraiser and direct adoption event here in Los Angeles in late November or early December for the holiday season. We will play a set, along with some other friends and artists at the event.

Most of my plans for the Fall besides promoting this single, “Bottle Your Crazy Up,” are my writing and recording a 5th CD. Know what I want to do…can’t wait to get back in the studio.

8) What has been your most memorable live experience?

I have been playing homeless events for some years now; and it is hard to imagine a more memorable experience in recent years than the homeless crowd that danced freely and happily to my music during the 5th Annual VeniceFest for the Make A Wish Foundation on July 28th, 2013. I have had plenty of full houses and appreciative audiences, but that particular “Country in the Sand” afternoon is quite memorable to me. This year was fun, but that performance was special.

Obviously, my performance for winning Americana Album of the Year at the L.A. Music Awards was an inspired show. One not easily forgotten. 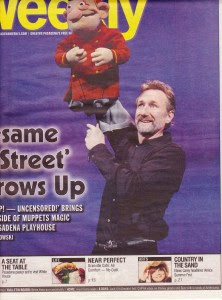 But my most prominent memorable moment in music came when I first heard myself on the radio in 2002 here in with “That Town” here in L.A. I knew I was home!

9) What goals do you still have left to accomplish in your career?

Everything! As an independent there are so many things you still must reach to be recognized with the household names. No matter what one might think of it, I expressed exactly what I still have left to accomplish in the opening cut on the CD, “Bring on the big.”

On an artistic level I can’t help but want to continue to make good records and make people feel good. I want to increase my song writing skills, and I want to direct movies. My short but somewhat successful career in film, before music took over, as an actress (Hoffa, Basic Instinct and the original Batman film, along with advertising campaigns like my role in one of Ray Charles’ Diet-Pepsi commercials) has left me with a taste for film.

I want to open or a couple major acts this year and next; and I am starting to work on a new CD. You can never stop striving if you want to earn the audience’s attention.

10) Thank you for your time. Do you have anything else that you would like to say to our readers?

Yes, Country music is about real people and their real lives. It is a wearing your heart on your sleeve music. We are regular Joe’s! We like are music to be about what is real and tangible in our lives! And we like to be able to sing the hook. But mostly, it’s all about the lyrics, the story!!