Treasure Guards is a tremendously interesting film, uniting beautiful locales (the film is set in Jordan, with a cast that meshes well together. The titular treasure is the Seal of Solomon, which was provided to Solomon by God himself. Treasure Guards stars Anna Friel as Victoria, the archaeologist (Land of the Lost, Limitless) and Raoul Bova as Angelo, under employ to the Vatican (Under the Tuscan Sun, The Tourist); the film is rounded out through the inclusion of Andre Jacobs as Teddy Carter (Black Sails, Black Venus) and Volker Bruch (The Reader, Tatort). When the supposed location of Solomon’s riches are learned, there is a massive expedition by various forces (including Teddy, Victoria’s ex-husband) to be the first there and reap the divinely-inspired goods. The film does a great job in existing at the intersection of the thriller, drama, and action genres; fans of a wide array of films will be able to appreciate the story that is being told in Treasure Guards. I feel that there is considerable space available for Iain B. MacDonald to expand upon the Treasure Guards brand in the years to come; as long as one continues to have the solid dynamic between Victoria and Angelo, there could be a number of additional films.

Make sure to purchase a copy of Treasure Guards from a well-stocked video store or from any online movie retailer. Expect to pay about $16-20 for a copy of the film. Visit the Monarch website (linked below) for further information about their slate of films and catalog titles. 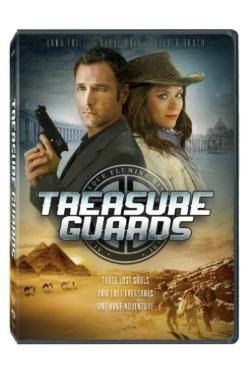