Go Some More is a timeless track that allows listeners of a wide swath to find something that they can appreciate. The driving arrangement is provide additional depth through a bouncing, driven set of vocals. These vocals continue in a cohesive fashion with  Mirrors, even as the overall musicianship takes a decidedly sunny and guitar-driven style. The track allows Amen Alibi to expand their palette, as the inclusion of a harmonica further bolsters the energy of the early album. Joined Together has a funkier approach, linking together swamp rock, alternative rock (B-52s), with a good amount of Robert Palmer / Huey Lewis and the News influence. The later tracks on Addicted are similarly strong, with the mid—point (Blame It on the Moon and Break Down and Cry) giving listeners the kick that they need to stick with the rest of the title. 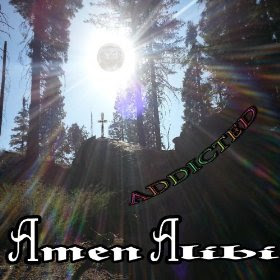 Another String has a They Might Be Giants meets R.E.M. feel that has just enough edge to maintain relevancy in the current day, while Hey Man slows things down slightly to allow the act to provide the finesse and narrative intricacies that will stick with listeners long after the album has ceased. Addicted ends with a few extra tracks – a radio edit of Go Some More and an instrumental, D.R.U.M.S.. With the pop and the instrumental side of things stoked, Amen Alibi have ensured that listeners will be absolutely unsure about what is to follow. Addicted shows that the band is taut as a drum, and can hit a variety of different styles while keeping things cogent.

Addicted can be purchased online at Amazon, and individuals that wish to locate additional information about Amen Alibi would do well to visit their domain.

Top Tracks: Blame It on the Moon, Go Some More,