The band released High Water late last year, and can be seen live at Axum’s Level X Lounge in Washington, DC on 4/26 and Desmond’s Tavern in New York, NY on 5/31. Make sure to visit their social networking profiles to locate more information about the act, their releases, and their live shows. High Water is a raw and visceral title, but is recorded in such a fashion that each constituent unit of the band is able to properly shine. 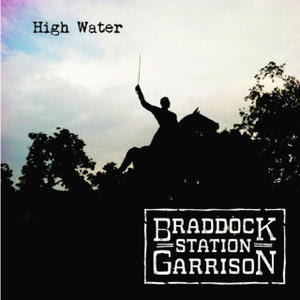 The act is able to generate a wholly cohesive sound even with these disparate elements, meaning that High Water can be enjoyed as a collection of tracks or a cogent narrative. I love the fact that a slew of Braddock Station Garrison’s cuts – Into Your Arms and California Specific – hover around the five minute mark. Where other bands struggle to keep listeners interested in their music at the three minute mark, the twists and turns that the band provides will keep listeners on the edges of their seats until the conclusion of the EP.

Another strength of the High Water EP comes in the band’s consistent output – where the second half of a great many albums are weak compared to the initial tracks, Braddock Station Garrison only put the cream of their crop on their EP. The aforementioned California Specific and the EP’s ultimate track, Girl Gotta Gun, represent two distinct sets of influences for the band. While California Specific follows nicely from the rest of High Water, I feel that Girl Gotta Gun is a track thaty acts as a bridge between the rest of the tracks on High Water and a set of paths that the band could conceivably take in the years to come.

The sheer amount of energy that the band has in their live performances (evidenced particularly well at their live iteration of “Hey Cindy”, located at www.youtube.com/watch?feature=player_embedded&v=QnhnCHUsvCU ) is simply infectious. This frenetic take on their track makes what one hears on recorded media to be something wholly different from what will be heard in the live format.