Three Philosophers pours with a small off-white head and a vibrant brown / orange coloration. The beer nearly approaches the 10% ABV mark but hides this considerable alcohol percentage with a nice amount of sweetness and a deceptively cloying overall mouthfeel. There is a velvet smoothness that is here that makes a Three Philosophers experience utterly unlike any other quadrupel; hints of citrus fruit and plums can be picked out from the beer as the effort begins to warm up. There is the slightest hint of hop that can be discerned, disappearing as quickly as it came on. A maltiness remains that provides the substance of the beer, the anchoring point that keeps things interesting from the initial sip to the final quaff. The beer is able to keep things focused as the effort warms up – the constancy of Three Philosophers is something that rarely occurs in beers. This means that many efforts will gain a funk or lose some bite as they warm up, but this cool, calm, and collected beer shines from beginning to end.

Visit the Ommegang website for more information about the entirety of their efforts and for the locations at which one can find their efforts. Keep an eye out for other reviews of the Ommegang product lineup in the weeks to come. 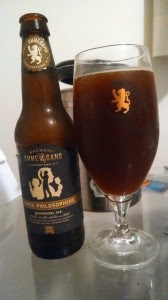