Adventure Time Explore the Dungeon Because I DON’T KNOW! Review


Explore the Dungeon Because I DON’T KNOW! is one of the few games that adds a decent amount of the lore of the inspiring show while having a graphically distinct art direction. The gameplay style is reminiscent of the Zelda titles for the Super Nintendo, while the choice of characters (Finn, Jake, Cinnamon Bun, and Marceline) really provides a Gauntlet-like sheen to this game. The game does a great job in varying the experiences of players as they delve ever deeper into the Secret Royal Dungeon. The game does well in varying the gameplay styles of each of the characters – Marceline is able to fly but cannot block, while the melee players are able to boldly ignore projectiles. A shop allows players to further boost the gear of their characters (in a fashion similar to the AT ep “Dungeon Train”), while the lower levels will ratchet up the difficulty to ensure that players still have a fun go of it. The title is rendered beautifully and represents a great time sink. The controls are intuitive and the game does not bog down. DLCs have been planned to allow players to assume the roles of other popular Adventure Time mainstays like Flame Princess, Lumpy Space Princess, and even Peppermint Butler.

The game has been released for a variety of consoles (aside from the Playstation 3, there are also PC, Wii U, and 3DS versions of the title. This would be a perfect addition to the collections of anyone that is a fan of Adventure Time or of isometric titles like Zelda, Diablo 1 or 2, or Neverwinter Nights. The sheer amount of replay value that is present (especially when other players get into the mix) ensures that players will have this in their consoles for months after purchasing the title. 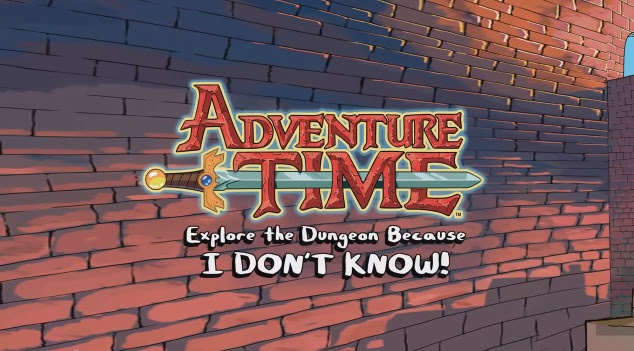 
Adventure Time Explore the Dungeon Because I DON’T KNOW! Review
Posted by NeuFutur Magazine at 7:36 PM