Collision Earth is a film that blends together sci-fi and disaster movies in a way that is seemingly realistic. The title links together up and coming actors (Diane Farr of Numb3rs, Andrew Airlie of Reaper) in a title that draws from films like Armageddon and Apollo 13.  Collision Earth captures the drama when Mercury is set into motion; when a comet strikes the Sun, Mercury is the planet unlucky enough to be taken out of orbit. The planet ends up on a collision course with Earth (thus, the name), and a group of individuals are tasked with ensuring the safety of humanity.

Collision Earth could easily stand as a theatrical release; the graphics add the perfect bit of otherworldly flair to the film. The idea of Project 7 existing is perhaps the most fascinating facet of the film; the presence of such a powerful force would absolutely change the power dynamic of the world. The hints of action that are interspersed through Collision Earth keep the momentum high, as does the shifting of sets. The DVD edition of this film marries a stellar video capture with a similarly-strong audio track. This is the definitive version of Collision Earth, and even those whom have seen it on SyFy should give this disc a try.

Collision Earth is a perfect popcorn flick, and will ensure that views continually come back to the title. The title may be on the lower end of budgets, but it will immediately capture viewers’ imaginations and keep them until the end. Make it a point to check out the Anchor Bay website for more information regarding their 2013 slate of films, as well as Paul Ziller’s other movies (Polar Storm, Ice Quake, and Stonehenge Apocalypse). 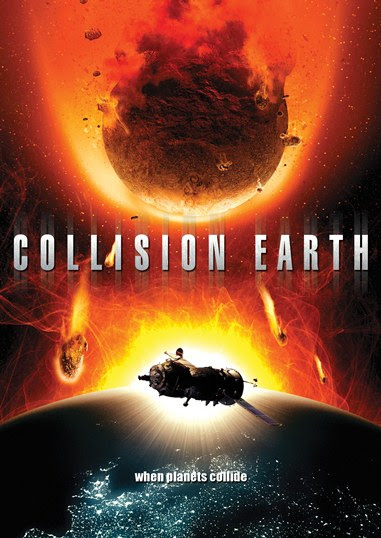