What brought the band into creating music? How long have you been around? 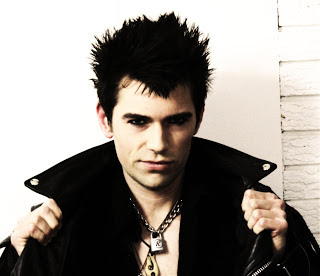 What is the most memorable time that you have had at a live performance? What cities would you still like to play, and where do you think your next tour will take you?

- We haven’t gotten out on the road yet as HART, but we are in talks for something in 2013.  I love Oslo, which is where Steen and I are located, and I really want to get over to some cities in Sweden soon.  Big places I want to go?  Japan, China, the States, Germany, France.  Everywhere!

How does a track move from initial thought to finished effort?

- Pretty much just me screwing around on a guitar, and if something comes up, I switch on the computer, open up Pro Tools, plug-in, and go at it!  I usually just have a riff, and then things come together.  Rarely do I write something cool when I actually sit down and think “Ok, I need to write something”.

What influenced Hart to release “The Conqueror” on cassette tape?

- Me wanting to do it!  Haha, I really wanted a cassette to hold in my hand.  Its really cool seeing our album on a cassette, and it sounds great too!  Plus, the whole album is included as a download, so you get both worlds.

Why should readers buy “The Conqueror”? What are your favorite songs on the album?

- If you are a fan of early 80s heavy metal, like early Twisted Sister, Judas Priest, Motley Crue, etc. then this album is for you.  It was recorded and mixed to intentionally sound like it was made in the early 80s.  The album and CD art even reflect this!

How do you feel that Norway differs from the rest of the world in terms of musical tastes and culture?

- I feel like Norway comes together with Sweden and Finland in that they seem to have a big appreciation for 80s-inspired music.

Which form of promotion has helped Hart out the most, and what would you tell individuals that are looking to create their own music?

- I would have to say that social media has played the biggest part.  That and album reviews.  I think bands need to try to understand social media.  Its an animal, and it can be tamed.  I’m learning as much as I can!  You know, you can always hire someone to manage your online presence, but its not the same for the fans who interact with you.  They like it a lot more if they know its actually the artist speaking to them.

What does 2013 hold for you, and how can readers connect with you and your music?

Do you have anything else to say to our readers?

– Thanks for reading, and I hope you enjoy “The Conqueror”!  Thank you for supporting 80s-influence music, you rock!