2014 was a stellar year in the gaming world. We saw heaps of excellent releases fill up store shelves and we spent a heck of a lot of time inside as a result! Still, though, looking forward into the new year, it’s always nice to know that there’s a new gaming experience around the corner to sink our teeth in to, and boy, 2015 is certainly not set to disappoint. Here are a few of the most intriguing, hotly anticipated titles set for release this year! 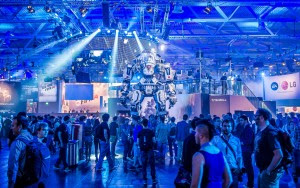 Coming out of Wild Sheep Studios, the new studio of Rayman creator Michel Ancel, WiLD is a PS4-exclusive, open world game set 10,000 years ago. Players can play as any creature they wish- eagles, bears and wolves included- and will be able to explore a game world supposedly the size of Europe itself! This could definitely be one to watch, but beware; Ancel has been known to cancel projects in the past.

Casino games are big news nowadays- millions of mobile users across the world are enjoying playing games such as poker, blackjack and slots- and South Africa’s BlackDiamondCasino is one of the most promising rising providers out there right now. Deals, a great variety of games, and-most importantly- security are all hallmarks of BlackDiamond.

Everybody’s Gone to the Rapture

This curiously named title, also a PS4 exclusive, is one of 2015’s more intriguing releases, seeing players controlling a scientist who is trapped in the very moment the apocalypse happens. Everyone’s disappeared, and you need to work out what the heck is going on!

Produced by Platinum Games and Hideki Kamiya- two titans of the gaming world- Scalebound is a game for those that simply love dragons. Fighting dragons, riding dragons, bonding with dragons- this one looks set to be a very exciting game for Xbox One owners.

Say what you will about the first Dead Island games; yes, they were rather repetitive, annoying games, but the free-roaming, zombie killing action was a lot of fun- for the first few hours, at least. Dead Island 2 promises co-op gameplay, less repetition and it generally seems that the game’s makers are taking on board the criticisms of their earlier releases, which is always good news.

If you played the original Battlefront games, this release is likely to get your pulse racing. DICE studios, producers of the Battlefield series- are in the process of producing a brand new Battlefront game, complete with beautiful graphics, amazing gameplay and a wonderful attention to detail. Stop salivating.