Authority Zero, Reel Big Fish, and Less Than Jake made for a tremendous night. The House of Blues was more packed than we had ever seen it with their barely any place to move when one wanted to walk through the crowd. The sheer amount of energy that was present through Authority Zero’s set was substantial given their opening space on the card. The band was able to create a style of music that linked together acts like Pennywise, Strung Out, and Face to Face. The show only chilled out for a few brief moments as Reel Big Fish was doing their set up on stage. RBF’s performance was not full of props or other junk cluttering the stage – Reel Big Fish had a little more than their instruments, microphones and monitors, and a cloth backdrop with a band logo. The banter back between the various members of Reel Big Fish take things light and lively as front man Aaron was able to get the crowd immediately whipped up into a frenzy. 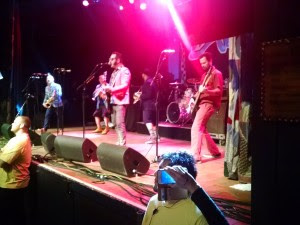 The band was taut as a drum, a feat made more impressive due to the number of people on stage coupled with the dynamic between drums, brass, guitars and multi-part harmonies. The band pulled out a wide variety of greater and lesser known songs including a track from band side project The Forces of Exil.

The amount of audience participation that occurred during Reel Big Fish’s set was astonishing meaning that it was incredibly easy to discern the lyrics that the crowd were screaming, something that was made even more clear when Aaron ceased singing for a few moments. There was a gimmick that the band played along with for a few minutes as they played the wrong place on a track, a hallmark of their performance going back a number of years. The band was able to end their set authoritatively with a spot-on cover “Take on Me” (from the BASEketball soundtrack) and Self Esteem by The Offspring. The crowd grew the most raucous with the band’s performance of Beer which brought a number of attendees to the photo pit from general admission; there were people stage diving every few minutes. Reel Big Fish were simply one of the best bands that we have seen this year and whether they are a fan or are just familiar with a track or two should see them on this tour.

Reel Big Fish’s 2015 Winter Tour Dates with Less Than Jake and Authority Zero are as follows: