Heavyweights is one of those modern classic comedies that deserves to be seen as being on the same level as Airplane or Animal House. The Blu-Ray edition of the film looks to introduce the film to an entirely different audience. For those that have not seen Heavyweights, the film surrounds a camp for larger children and the rift between the original owners and Tony Perkins (Ben Stiller). The film is able to stand on its own as a film that can be appreciated by adults and children alike. The Blu-Ray transfer of Heavyweights is absolutely stunning, ensuring that what viewers are watching is just as sharp (if not more so) than

Disney has included a number of different featurettes to further increase the value of the Blu-Ray release. This means that 30 scenes have been further fleshed out through the inclusion of deleted scenes, while the film itself soars on a stellar director’s commentary. Judd Apatow (director) shares stories and reminiscences about the filming of Heavyweights alongside Allen Covert, Steven Brill, and Aaron Schwartz (amongst a wide array of others). Disney has also included a Where Are They Now featurette, showcasing the lives and times of the children utilized in the film. The Making of… featurette is a vital view into the distant land that was the mid-nineties, while the video chat held between Apatow and Kenan Thompson is absolutely hilarious.

Disney has created an ultimate edition of Heavyweights that would be a perfect inclusion in any stocking or birthday gift. Make sure to pick up the title from any online retailer or video store. 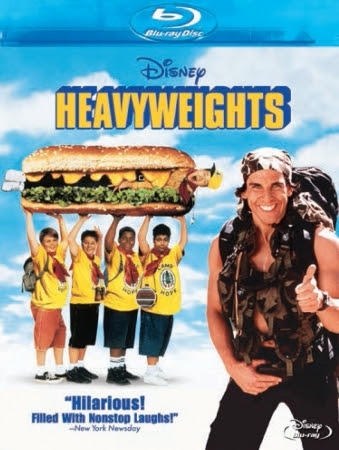