The folks at the Montreux Jazz Festival have been cleaning out the faults lately, reaching up to the high shelves and releasing decades old performances on DVD. The latest, and one of the most impressive, is a Stray Cats set from 1981.

The 15-song long DVD set was recorded just months after the Long Island Rockabilly trio released their debut and the despite sounding like nothing that was being put out on the radio at the time, the crowd at this show sang along loudly to almost every track, a more impressive feat once you consider a vast majority in attendance were not singing in their native language. The first thing that hits, aside from how few tattoos  the skinny-armed Brain Seltzer was sporting at the time, is how animated the trio was in their shows. Drummer Slim Jim Phantom stands and dances behind his drums through most of the show while Lee Rocker is as animated as anyone has the right to be while trying to keep the upright bass from falling down. And Seltzer is exactly what a front man should be: wild, frenetic and cool as hell.

The band covers their biggest hits (“Stray Cat Strut,” “Rock This town” and Runaway Boys”) along with a fantastic cover of “Be Bop A Lula”. It’s time for a proper Stray Cats reunion. 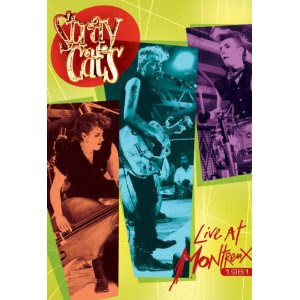