Storm The Castle! â€“ The Free of Charge! Demo (CD) 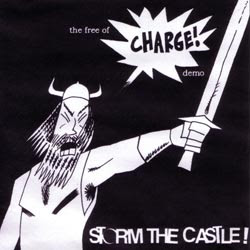 I had little clue what to expect when I first slid this disc into my player. A style that would work perfectly upon the disc of all the major emo bands first assaults listeners during “Where is my Crossbow?”, to which a set of vocals that seem ill-fitting soon are added. After a minute or two to get acclimated to the disc, it is not that the vocals are bad, but that they are influenced by an entirely different tradition. The vocals, as well as the guitars, seem to be drawing on an eighties metal tradition even as there seems to be an emo and dance-punk feeling to Storm the Castle! that flitters through the entirety of this demo.

If there is one thing that Storm The Castle! can use as a tag, it is that they blend together a diverse array of acts and genres to come with a sound that is purely their own. The first track on this disc may only be a little over four minutes, but so many things are happening during this track that individuals feel as if the band has embarked on a delightful, ten-minute long epic with “Where is my Crossbow?”. The later tracks on this demo are all much longer than “Where is my Crossbow?”, a good thing considering “Firebreathing Sympathy Machine” comes out of the gates with a style that is straight (early) Danzig. The guitars soon normalize to come up with a style that individuals have heard previously, but are a blend of virtuosic and compelling riffs that work perfectly with the Jim Morrison-esque vocals present on this track. There are just so many things to hear during “The Free of Charge!” demo that individuals should not be satisfied with only one or two listeners.

The production is at a level where individuals can hear every level of the band, and Storm The Castle! has ensured that each second of this album is chock-full of sounds. By the end of the disc, individuals still have no clue where they should put Storm The Castle! if they were given a list of genres. Simply put, Storm The Castle! is a classic metal, emo and rock band, a spastic blend of their influences that ultimately comes out to be something that is greater than the sum of its constituent parts. Regardless of what music you like, get a copy of this disc!


Storm The Castle! – The Free of Charge! Demo (CD)
Posted by NeuFutur Magazine at 8:15 PM