Your Future Lovers are an act that set out to capture the world with their latest effort, Eat. Play. Leave. The twelve tracks unite to make one cohesive statement about the band’s styles and influences, but the disparate approaches that are taken ensure that listeners will never truly know what to expect from the band. There is a sub-plot that is presented during an arc on Eat. Play. Leave that emboldens Your Future Lovers’s bombastic sound; the inclusion of a 14-piece orchestra during a considerable fraction (5 of 12) of the album makes this album touch upon music’s past, present, and future.

The Train strips away a number of these additional layers and showcases a band that can perfect the pop-rock format. The vocals and guitars are highlighted during this track, but The Train’s unique feel comes from the drum lines that are laid down. Your Future Lovers can work equally well in numerous rock and alternative genre conventions, but each track on Eat. Play. Leave further cements their status as leaders of the pack.

Your Future Lovers distinguish themselves immediately from the rest of the pack on Eat. Play. Leave. In a period in which bands focus solely on singles, Your Future Loves make an album that never has a dull note. Rotten on the Vine and Fun present listeners with a 1-2 punch that puts an emphatic exclamation point on this album. Make sure to check out their Facebook and pick up a copy of Eat. Play. Leave (CD); it would be a great stocking stuffing for those that like good music done right.

Top Tracks: Somebody in the Dark, I Got It Easy 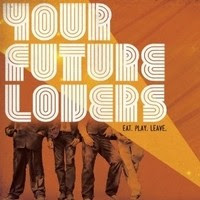 Posted by NeuFutur Magazine at 9:00 AM