“Who You Are” has a style of hard rock music that blends early Manson with Filter and Stabbing Westward to link together the eighties and nineties into a style of music that is Stiilpoint’s own. “Who You Are” also moves into a Deftones-like direction, one that has been travailed in the past but without the ability shown by Stiilpoint. The production seems to have a little to much of a tinny sound, but the ability shown by Stiilpoint is not diminished by this minor issue. Since Stiilpoint has so many nods to the acts that influenced them, the lure of going and merely rehashing what has been successful before was high. The band is intelligent enough to bring a new, band-specific sound to all of their fans. The guitar riffs that start up “No One Like Me” play on the Velvet Revolver tradition, even as there are Motley Crue-like vocals that are present throughout this track.

The space between the stanza and the chorus of “No One Like Me” has the same wide-open constructions of a Scorpions. The track gives Stiilpoint a much earlier (early nineties) feel to their sound, something that varies up what one should expect from the band. “Stiing” is a slower track, but even from the earliest part of the track, Stiilpoint gives hints that the music that they will be playing will be much harder than what they produce on the early part of the track. Whle there is more than enough material in the beginning of each stanza, the guitars seem a little strung out during this point. I can understand what Stiilpoint is trying to do with this track, but with the more rapid-fire style of the later part of the chorus, one wonders why the band did not attempt to make all parts of the track similar. Still, this track is strong because it gives listeners yet another way to conceive of Stiilpoint.

The arrangements are what stand out during this track, as one can almost hear some thrash influence present in Stiilpoint’s overall sound. “Bloodstaind Memory” is one of the band’s strongest efforts on “Bleed Every Note”, and it may just be that track that will sell the most copies of “Bleed Every Note”. Stiilpoint is an act that not many people know at this point, but chances are good as more individuals get familiarized with the band that they will gain more and more in the way of fans.

Top Tracks: Bloodstaind Memory, Who You Are 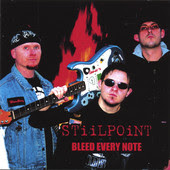