Arm Yourself With This Song is a folksy, intimate piece of music that will remind listeners of acoustic-era Bob Dylan, Woody Guthrie, and Phil Ochs; there is little more present here than a man and a guitar, but the sheer gravitas and authority that is created with this song will have listeners focused in for the balance of the album. Can I Ever Be Noticed showcases the vocal ability of Ames, who crafts an alluring narrative alongside a call and response approach. Fans of a wide array of genres – blues, gospel, and the singer-songwriter genres – will be able to locate something that they can appreciate with Ames’ output on Oakville Ontology. 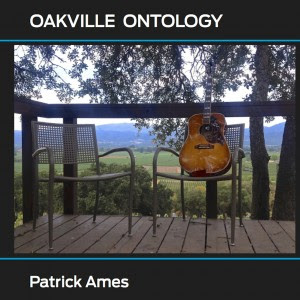 While I Could Be Mistaken is a track that nearly reaches nine minutes, the arrangements and interplay between the instrumental and vocal sides of Ames’ music keep things fresh and interesting from beginning to end. The cohesion that the tracks on Oakville Ontology possess ensures that the different twists and turns that Ames includes here resound loudly with listeners, even when the album has ceased. The skill and ability present on efforts like the penultimate Time Opens All Wounds is impressive, as the instrumental-heavy composition begins to include vocals; the resulting track is fulfilling, intricate, and will require a number of additional spins before listeners know the full magnitude of what Ames has included here. On the Yellowstone puts a definitive end to Oakville Ontology, but the track does not feel as if it is an ending; Ames has made an effort that works well with the other cuts on the album as well as provides some sense of where he could go on subsequent recordings.

Make sure to visit Ames’ website for more information about Oakville Ontology, any live dates, and further news from his neck of the woods.

Top Tracks: Arm Yourself With This Song, Can I Ever Be Noticed