It is rapidly becoming the holiday season and as such Christmas classics such as Rudolph the Red Nosed Reindeer could stand a little gussying up. As the original film is approaching its 50th Anniversary the video quality that many individuals recall is a far cry from the high definition world in which we find ourselves today. This Edition of the film provides some of the most clear video that we have seen from a film all of this era – the film is further given additional luster by a cleaning up of the film’s audio track. 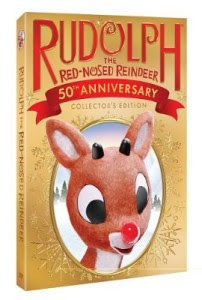 Individuals that grew up to Rudolph the Red Nosed Reindeer will be astonished at the product that they purchase with the 50th Anniversary Edition, the definitive DVD version of this holiday flick. There are a number of additional features that have been provided on this DVD.

A unwrapped section provides some insight for the sheer amount of work that went in to the creation of the movie, while the sing alongs isolate the music and really will provide a jolly holiday feel to any get together or party that one may have this season. The 50th Anniversary Edition of Rudolph the Red Nosed Reindeer will be available at a wide array of video stores and well stocked entertainment outlets. This is a perfect gift for anybody that loves the holiday season.