One can purchase a Nintendo, Sega Genesis, or Super Nintendo at thrift stores, flea markets or any sort of second hand store at which one can find the consoles. The sad fact about a great many of these machines is that they work only a portion of the time. This is because the newest generation of these vintage game consoles are nearing their 20th year in service. While Nintendo and Sega created rugged machines that would stand up to the incessant beating and neglect of the younger audience, the ravages of time make purchasing one of these consoles a tricky if not downright dangerous proposition. Luckily there are companies that are creating consoles that will play older video games without the same set of problems that typically arise when using old technology. 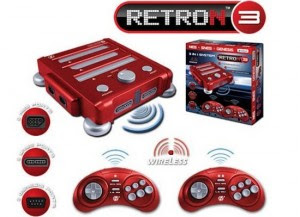 The RetroN 3 Gaming Console plays Nintendo, Super Nintendo, and Genesis titles without a hitch. The RetroN 3 has controller ports for each of the consoles that it plays and players should be confident that whatever movements or button pushes will be registered correctly by the product. Just like the previous generation of consoles which it plays the RetroN 3 Gaming Console is extremely durable and will still work no matter whether one carries it around in a rucksack, has it on the floor to get kicked by humans and pets alike or otherwise places it into an extreme situation. The RetroN 3 will cost around $70 and one should be able to find the Nintendo games for about two to five dollars, with the Super Nintendo and Genesis games for about the same range – just as the case with all RPGs those titles will cost a pretty penny. This is far beyond the purview of the article so suffice it to say the RetroN 3 is something that should be purchased for anyone that is an aficionado of vintage gaming or has the NES, SNES or just games without a working or reliable console.