On the album’s initial track, Give Me A Sign, the band is able to create a track that provides a harder edge to Nine Inch Nails; what results here is a high-energy, hard rocking effort that will stick with listeners long after the album has ceased to spin. 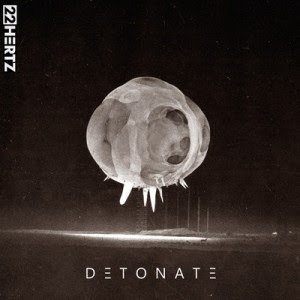 The Signal in the Noise is a track that is darkly emotive and showcases a tremendous depth to 22Hertz’s compositions. The narrative that is told through the interaction of the distinct elements will keep listeners on the edges of their seats; there are so many twists and turns, major and minor that 22Hertz presents here that fans will have to spin this cut multiple times to hear exactly what is going on.

Darker Shades of Black has a thick, ropy bass line that acts as a polar opposite to the punctual and punchy drum line. A layer of guitar fuzz provides the proper oomph for this section of Detonate. Everything is a track that is radio-friendly while still working well amongst the different styles and approach that the band has place don Detonate. The effort has hints of Static-X, The Prodigy, and Union Underground. Where 22Hertz succeeds most during this track is providing something that listeners of a wide variety of genres can appreciate. There is still the edge that has been honed over the course of the album, while a more catchy set of vocals and arrangements will capture the minds and hearts of rock fans. Make it a point to visit the 22Hertz website for more information about the band, samples from Detonate, and see how this Toronto band has decided to absolutely tear up the charts.

Top Tracks: Give Me A Sign, The Signal in the Noise