Greek black metal vanguard Acherontas reveal a special teaser video for their highly anticipated fifth album, Ma IoN (Formulas of Reptilian Unification), set for international release on February 27th via W.T.C. Productions. Since their metamorphosis into a new entity in 2007, these Greeks have staunchly upheld the magick ‘n’ mysticism of classic, second-wave black metal. Created by the lodge of Aural Hypnox – the individuals behind Arktau Eos and Halo Manash – and with music selected & constructed by TT of Abigor, this teaser video can be heard & viewed in its entirety HERE.  Over the course of four, increasingly ambitious albums – capped by Amenti – Ψαλμοί Αίματος και Αστρικά Οράματα, released in 2013 by W.T.C. to international critical acclaim – Acherontas have explored vast vistas of the imagination with a potently kaleidoscopic style of black metal that ably bridges traditionalism and the avant-garde. Now, with Ma IoN (Formulas of Reptilian Unification), the band continue their creative ascent by paradoxically descending deeper into the depths of the occult underworld. Across 11 expansive tracks in a time-evaporating 70 minutes, Ma IoN explores a wide swath of sonic territory, ranging Acherontas‘ characteristically windswept style of songwriting to twisted ‘n’ twisting variations of it to, most crucially, ritualistic soundscapes comprising ancient Far Eastern & shamanic instrumentation. Taken together, it’s a total sensory experience that effortlessly guides the listener across chilly night skies, barren desert plains, humid marshlands, and the fiery abyss of the unknown. In their never-ending quest to seek the deepest wisdom, Acherontas are here joined by a whole host of incredible guest musicians, including members of Abigor, Malign, Nightbringer, Black Seas of Infinity, Emme Ya, and Tatir amongst others. What results is a shockingly bold, daring vision of black metal: Ma IoN (Formulas of Reptilian Unification). Cover and tracklisting are as follows: 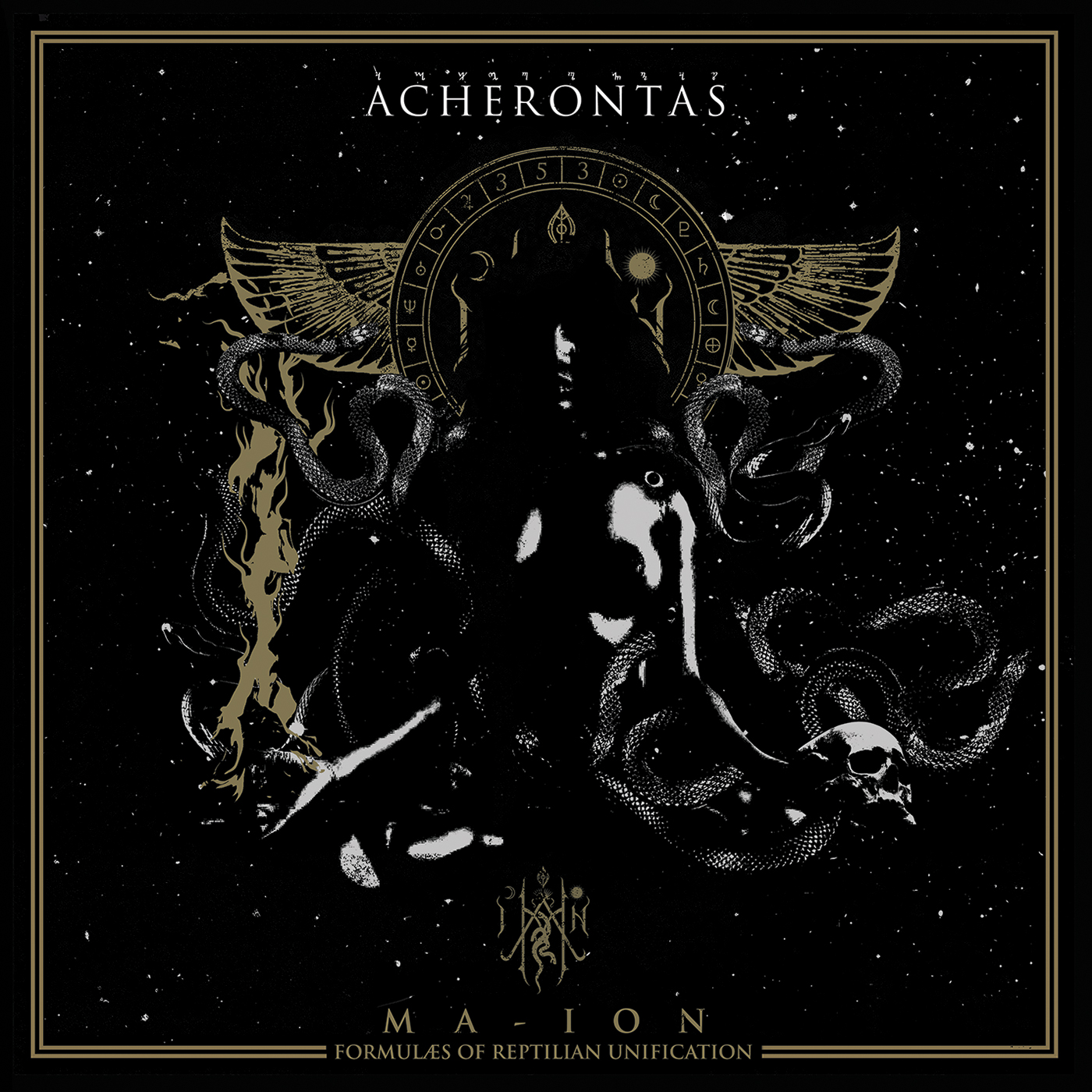 6. Shaman And The Waning Moon

8. The Awakening Of Astral Orphic Mysteries – Behind The Eyes Of Irida

Founding vocalist/guitarist Acherontas V.Priest explains the concepts behind the new album: “From the depths of the Typhonian tradition, Ma IoN dives into the most Stygian waters of the Primal Godess to reveal the vast atavistic elements of the past unto a new Reptilian Prism. Unification of the sacred shamanic formulas and the dark Typhonian sources, the matriarchic tunnels of Layil with the sun-clad halls of Ra. Invoking the primal Therionic Self to enable the transformation of the sorcerer and calling upon the entities of Knowledge, Ma IoN forms a key to unlock the mysteries hidden beneath, far from the modern degradation of the nowadays circus, so-called imbecile, hipster occult BM scene. We do not belong in any of your poisoned scenes or part of your public relationship parties of entertainment… We are here to serve the magical current of the ancients, the underground art of the ’90s era and to offer a magical provocation to those with eyes to see and feel their potential, to stir the stagnated waters of reality. We ignite the torch to burn the veil and unlock the subconscious of the dreamer to hunt and embrace the Luciferian adversary. Τhese are not just empty words, but shells that reform in Chi so the Great Planetary Work to be carved.”

In other Acherontas news, the band have confirmed the first tour dates for 2015. With two more dates to follow, the current list of dates & cities are as follows:


Acherontas confirm first tour dates for the year
Posted by NeuFutur Magazine at 3:34 AM