Déracinés Des Hommes will have listeners comparing Francbâtards to acts like Sublime and The Transplants; stellar instrumentation and intensely-spat vocals make this six-plus minute track go by like it barely reached 90 seconds. The band is able to place so many twists and turns to this composition that listeners will have to dissect each track on this self-titled release to hear precisely what the act has hidden amongst each guitar line, drum, and horn line that is present. 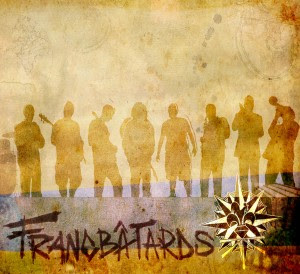 Rude Boy is a track that works equally well no matter if one was listening in 1980 or 2010; there is a certain timeless sound to this track that will have any fans of pop, reggae or of ska music absolutely up in their seats. The band has the talent to change up the styles that they play on a dime, meaning that there could be a light and bouncy beat paired with a much heavier, nearly metal sound.

Bulletin Spécial tops the seven-minute mark, allowing Francbâtards ample opportunity to create an epic track that will have listeners intently focused in to each distinct movement. Mind numbingly fast vocal lines ratchet up the speed during the earlier part of the track, while the instrumental side of things kick into high gear during the middle register of the song.

Mouton Noir is a fascinating track as it bundles together the ska/rock style that the band created during the initial half of the album with a slightly more Flamenco-infused demeanor. This is precisely what the band needs during the second half of the album, as listeners are given a firm kick in the butt to rocket them to the ending of the release. Check out the Francbâtards Facebook for the latest in information about this unique and fun band.