The Beat of the Funeral Drum has a complex tempo that works well with the UK 82 punk trappings that Steve has placed into the track. The drumming present here add complexity to the track, while the swirling guitars present at pieces make for a fulfilling cut. My Spleen Is a Beastmachine is a six-plus minute track that utilizes Lieberman’s trademark flute in a fun fashion; there is a tribal feeling to the track that seems influenced by hints of disco and dance. Cancer Ward #3: The Phlebotomy is a spiritual successor to The Ramones’ Teenage Lobotomy, albeit with just enough of Lieberman’s indefinable quality to make it purely his own. 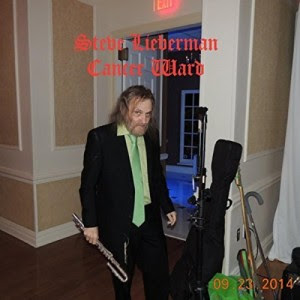 My Last Chanukah has a deliberate beat that keeps momentum high. Steve’s vocals are similarly strong, even if they tend to hide behind the fuzzy guitars and aforementioned percussive elements. The Punk Meets the Godfather is a track that possesses it all – pointed, sharp vocals, on-point arrangements, and some interesting lyrics but suffers from an element that would properly tie these disparate elements together.

There is a sense that this is an album in the vein of Warrne Zevon’s My Ride’s Here, but the album diverges in a few key fashions. Where there was a depressing finality to Zevon’s last effort, there are minor hints of hope interspersed through Cancer Ward’s 18 tracks. Further hope is provided by the continuity that the constituent elements of Cancer Ward possess with previous tracks from Lieberman’s extensive discography.

Cancer Ward is available from CDBaby, while a look into Lieberman’s mind is presented to viewers of his domain, gangstarabbi.com . Pick Cancer Ward up today.

Top Tracks: The Beat of the Funeral Drum, My Spleen Is a Beastmachine