Zarra’s Law stars Tony Sirico (The Sopranos, Lillehammer) has a police officer that is grieving the death of his brother, who was entangled in criminal enterprises. After it comes to light that the man responsible for killing his brother is being released from prison. Tony is accompanied his nephew (Brendan Fehr, Roswell, CSI: Media), with a stated goal of destroying the entire apparatus that caused the murder. When one watches Sirico’s rage and intensity bubble up, one can see the sheer amount of devotion and love for his family. The film shines in the way it flips the mobster movie genre on its head; the film seems as an evolutionary step forward when compared to Serpico or Russell Crowe’s role in American Gangster. 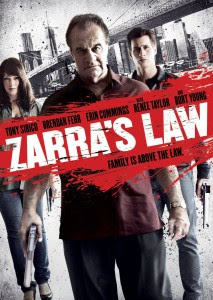 The visual quality of Zarra’s Law allows for viewers to be engulfed in all of the action of the film, while a crystal-clear audio track allows viewers to discern precisely what is being uttered. The film is taut and establishes motivations, progressions, and an ultimate conclusion to the film without providing their audience with fluff that is detrimental to the overall story that is being told.

Visit the Arc Entertainment website for additional information about Zarra’s Law or the films that the company has released or is releasing. Zarra’s Law will be available at well-stocked brick and mortar video stores and from a wide array of online movie retailers for around $15-20.