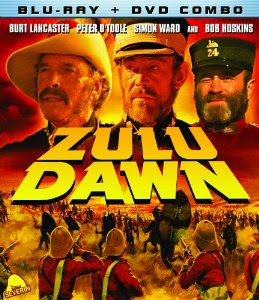 Zulu Dawn is an engrossing film that is helmed by a number of stars (Peter O’Toole, Burt Lancaster, Bob Hoskins, and Simon Ward), is bolstered through a stellar score crafted by Elmer Bernstein (who scored The Ten Commandments, Ghostbusters, and Stripes), and tells an epic story. Set 100 years in the past from its release date, Zulu Dawn captures the tense relationship between the Zulu Empire and the British forces in control of Cape Colony (South Africa). The title expands upon many of the themes first broached during 1964’s Zulu, but provides viewers with sufficient information about the players in the conflict. The costuming, set-design, and overall language used by the actors ensures that viewers are fully engrossed in the storyline.

Severin’s release of Zulu Dawn is incredibly sharp; the Blu-Ray version of this film belies the fact that the title is thirty-five-plus years old, while the audio quality has been cleaned up to ensure that ever line of dialogue and attack can be heard. Severin has rounded out this Blu-Ray release with a number of bonus features. This includes a historical accounting of the Zulu Wars by author Ian Knight, the original theatrical trailer, a set of the out-takes  for the film, and a brief interview with the historical advisor for the film, Midge Carter. The featurettes are rounded out with the inclusion of a piece where Ian Knight visits the site of the Battle of Isandlwana. Taken together, these featurettes provide ample context for which to enjoy and understand the events that occur in Zulu Dawn.